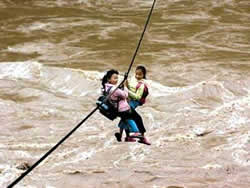 And here I thought I had a rough commute every morning. Being that I have to ride my bike up a hill and all.

“A bridge is to be built in a Chinese village where children are forced to cross a raging torrent on a steel cable to get to school. Nearly 500 children, from Maji village in Fugong town, Yunnan province, cross the most dangerous stretch of the Nujiang River each day.

They fasten themselves to the cable with a metal carabiner and a rope and slide across the 200 metre wide canyon.

The youngest student, A Qia, 4, has to go over by herself each day.

The villagers say that usually four-year-old children are taken by their parents, and begin to go by themselves from the age of five.

A Pu, five, who was stuck in the middle of the cable for nearly 20 minutes once, said: ‘I used to dream of having a bridge, but then I learned that my dream was too expensive.’

But officials finally agreed to spend £35,000 on a bridge after a TV programme was made about the children’s dangerous daily journey.”